English, Spanish, Chinese, Arabic, French, Russian, German, Japanese.
I Invented “The 99% Party” that can stop Corona, Vaccination and NWO. This is a Blockchain political party. It’s so easy, we could start with the next election. Currently, the world is in the middle of corona acting and vaccine massacre. I will lend my invention free of charge to the citizens of 200 countries if you abide by these terms of use. My friends around the world, let’s imitate this. Let’s stop the evil goverments of 200 countries with the 99% Party!
This page is an extraordinary invention that will change the history of 230 years of modern politics. But the mechanism is simple and easy to implement. Please take a serious look at this page because it is completely different from conventional political parties.
.
Inventor: @NeverBornBizman
Name of invention: 99% Party *Trademark applied for.
Summary: A political party that uses Blockchain to make its only headquarter unmanned. The only relationship is between the politicians and the people. The people are the party leaders, and the leadership is the people’s smartphone operation. The people also control the party’s funds. The politicians are marionettes. The biggest advantage of this system is the “post-payment system,” which allows the people to decide whether to allow or disallow the payment of salaries to their politicians after they have voted against (or for) a bill in the parliament. In other words, it is a political party that has its source of income firmly in the hands of the people. Therefore,
(+) This is a party where no one can agree to bad laws. And conversely.
(+) 99%Party will propose a new law that meets the needs of the people.
(+) You can propose a new law. → which will be submitted to the parliament by consensus.
(+) We can abolish the bad laws that were decided in the past and return the country to the way it was. This is a “decisive solution”.
.
Preparation: Nothing is required.
All you need is one app that already exists and we customize it for you. With a cryptocurrency smartphone app, the people can order their politicians to do things. We can even make reservations to oppose the next bad law that will come out. Therefore,
(+) We don’t need to keep monitoring the Congress.
(+) No more demonstrations in the future. Demonstrations, flyer distribution, and opposition rallies will become dead words.
(+) There will be no need to waste time criticizing the government on social networking sites.
It’s not a political app, but a just payment app, but it’s still $0 to own, and you can join freely just by downloading the app. I am in the process of customizing it.
The big difference is that 99%Party has done away with cash and replaced it with cryptocurrency. It is a political party that pays its politicians in cryptocurrency (instead of cash), so the people can decide at the touch of a button whether to approve or disapprove the salaries of politicians. No need to worry about the politicians. The politicians who are worried about price fluctuations will either cash in immediately or hold it in currency coins.
.
The funds of the headquarters are also Bitcoin.
The funds of the headquarters of the 99%Party are also in cryptocurrency, so the flow of money is transparent and can be seen by the public (in real time) by simply opening the Blockchain history. Rather, I converted to cryptocurrency for the purpose of showing. The expenses of the 99% Party, the current balance, the donations, the salaries of the members, and even the expenses spent by politicians. For the first time in 230 years of modern politics, we have a political party with zero corruption. 99%Party is 100% clean.
If the 99% Party can become the ruling party, a corruption-free government can easily be realized. This is not a dream. The 99% Party will change the world. It is an invention that will change the history of mankind.
Government-> (money)-> party leaders-> legislators “agree with bad law
Government-> (Money)-> Citizens-> Legislators: “Citizens command for or against

.
“Are the people okay?
“Are the people okay with participating from their phones?
Laws Assessments to check their ideology of the participants. The 99% Party will check the correctness of each person’s thought by assessing past bad laws on a scale of “-3 to +3”  for candidates, members of politicans, and citizens who participate via smartphone. Politics is a battle between the 1% of the rulers and the 99% of the people.
Only the registrants who have the “99% ideology” can run the 99% Party. For example, if a certain person are a “dangerous thinker” who has a + rating on the Corona Law or the Forced Vaccine Law, his will button is invalid and will not reflect anything. So no matter how many tens of thousands of internet right-wingers or government part-timers come in, they cannot manipulate anything.
* Check the participants’ ideologies on a screen like this.

Any operation is invalid for participants of dangerous ideologies. The wallet is a payment app. A phone number is required, so it’s safe to say that no one can fake their identity.
.
One goal: “Politicians are marionettes”
It is rather best for the nation in its present state. We need a year or two just to clean up with “repeal laws of bad laws decided in the past” because bad laws have piled up in recent years. It is better for cleaning up the nation if the politicians remain as opposition robots with no will. For the next two years, the 99% Party will not be looking for highly qualified people. If politicians are a marionettes that obeys the people’s orders, they are full score. So in the 99% Party, even political amateurs or political ignoramuses can run for office. In other words.
(+) The advantage of being able to increase the number of seats in parlament in a short period of time is also a characteristic of only 99% Party.
(+) The only political party that can make use of singers and talents candidates who are sure to be elected has been created.
(+) People who had the deposit to run for office but did not have the confidence to gather votes are also welcome.
For the next two years until the bad laws are repealed, politicians will be nothing more than robots speaking for the people. Since they are delegates (really), the 99% Party is what it should be. This is normal, all others are abnormal.
.
Final Goal !
A blockchain political party with an unmanned headquarters. The people are the ones who hold the funds of the party. It is a marionette party that cannot be moved except by the will of the people. All politicians are marionettes of the people. Imagine after the 99% Party is broadcasted on TV alongside the existing old political parties. The old party will lose its chance to win the election forever.
The main team of the 99% Party will consist of only “citizen” politicians who will debut from the 99% Party. If the 99% Party’s transfer team also stands side by side, it will be very effective in wiping out the seats of the other parties.
If one marionette party is born that is controled by the will of the people, the other nine parties will be “instantly! We don’t need it. Go away tomorrow.” “Hey, nine parties! We’re sick of politics that goes against People’s will.””We don’t like it again. Never show up again.”
No joke. It will happen.
* Patents and Trademarks
The 99% Party I invented have applied for a trademark. Whether the patent office finally approved the application or not, I also recorded “I am the original new arrival” in the Blockchain, which can never be erased. I have also acquired an archive that cannot be permanently erased because it is a Blockchain.
No other party can imitate this. They will be too scared to imitate the 100% disclosure of the Party`s funds.
The 99% Party can operate globally in 200 countries.
The 99% Party also has an advantage in state and provincial elections. If 99% Party are known, no other parties can win again. It is the marionette party of the people, so as soon as it is known, the other 9 parties will only end up disappearing. I will team up with 200 countries around the world, so your 99% Party will also become the most famous party in your country.
.
To all my friends around the world.
The 99% Party, which I invented, I would lend to (not politicians) the citizens of 200 countries for free. Normally I should go to each country politely, but now we are in the middle of a massacre with corona and vaccines. Right now, the citizens of 200 countries are in a life-threatening situation, so you should hurry. Please imitate and use my invention in a big hurry if you guys will follow the following rules.
There are no difficult conditions. All I am concerned about is reputation of 99%Party within your country. If the organization has a good reputation, I will grant it. If it has a bad reputation, I will revoke my permission.
* There must be only one party in one country.
* The policy of 99% of the participants must be decided by a majority vote, not by a single individual.
* Only complete “the Law Assessment” function before conducting a majority vote.
* Do not give the politicians any decision-making power. Make sure the people take the initiative in this party.
* Send me the URLs of reputable news in your country and I will link them with the official URLs.

(c)NeverBornBizman. Diffusion free. Copy and reprint freely with this URL.

wwbb > antenna blog NBB > NBB solution
* 99% Party that can stop Corona acting, vaccines and NWO.
* 99% Party (8 languages)
* Became a global household name with teams in 200 countries.
* 99% Party wins both state and county elections.
My Inventions of the Past
* Punch Voting Election method that made injustice 100% impossible.
* MIPS (Most Ideal Politic System)…A site where politicians line up from 1st to 300th in order of allies (enemies). So, even people who are inexperienced in selecting people can vote without making a mistake. 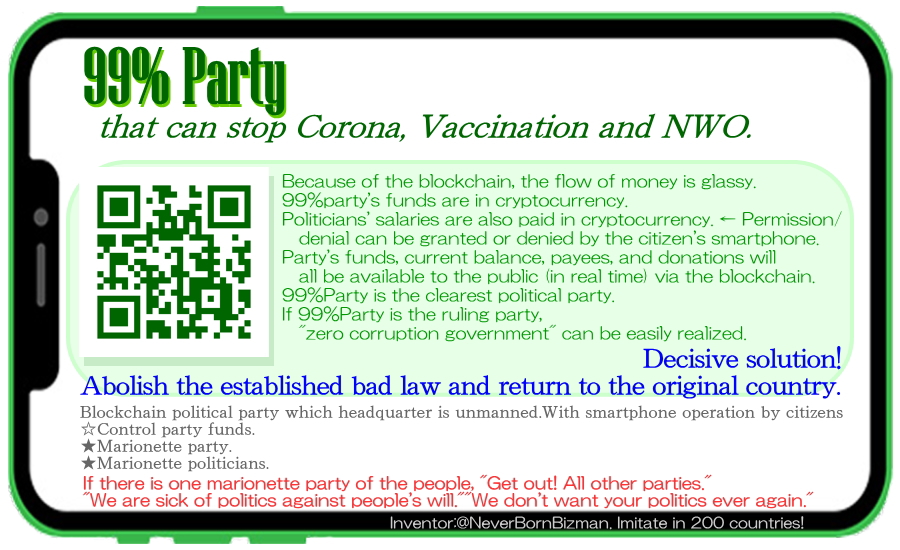 https://wwbb.me/us/nbb_copy/blog_pic_poli/99_card_en.doc
1, In lieu of flyers, 10 business cards. For printing in Word doc.
https://wwbb.me/us/nbb/99pp-en/
https://twitter.com/NeverBornBizman/status/1407883986093834240
2, Let’s post this URL to famous singers, actors, athletes, and celebrities in your country and urge them to run for political office.
3, If there is a credible party in your country, let the two parties fight together. Never combine. The initiative should be taken by the people.
4, If there is a credible media in your country, let’s fight together.
5, Invite companies that are 99% ideological in your country.
English, Spanish, Chinese, Arabic, French, Russian, German, Japanese.

「I invented “The 99% Party” that can stop Corona, Vaccination and NWO. Let’s use it in 200 countries!」への4件のフィードバック