Many governments are on the verge of bankruptcy after spending huge amounts of money to fight corona. If your government goes bankrupt, your savings will also be confiscated.
The colonies of world rulers are about 120 countries.  There are only 80 truly independent countries.  I have found the date when the governments of 120 countries will simultaneously steal your savings. It will be May 6, 2021 (UTC). Everyone please be careful.
There are two ways to steal your savings.
(1) How to steal your savings by causing a life or death panic with corona fake NEWS.
(2) How to reduce your savings balance to zero with an EMP weapon that fakes a natural phenomenon. Surprise without panic.
(x) The end result of reducing legal tender to zero in a financial crash without confiscating your savings is almost 0%. This is because there is no profit for the government.

I have lined up the predictions of public figures and the prophecies (theatrics) of the main culprits.
~ Schedule for 2021 ~
In January or February, the domino bankruptcy of major corporations will begin. The financial crash will begin. :Softbank CEO predicted on Nov.17.
January 15, the date of submission of USDT documents on BTC price manipulation. I downplayed it.
Jan. 16-Jan. 20, armed demonstrations planned in all 50 states before Biden’s inauguration. :FBI predicts Jan. 10.
February 17, the day Japan confiscated savings from its citizens in the last bankruptcy proceedings 75 years ago.
Mass deaths from toxins in the water supply starting in March. :Former bureaucrat Harada predicted Dec. 31. I deny it 99%.
“During 2021, mutant Corona II in animals during 2021. Animals should be extinct.” :by Johns Hopkins University in 2017
“Between December 20 and March 31, panic due to mass deaths from mutated and instantly deadly Corona II.” :Indian prophecies that have been 100% accurate in the past(Actor of the world’s rulers).
*The truth is that there is no corona or mutated corona, so it will be a vaccine causing adverse deaths.
From the end of 2020 to next July, rest will start in several countries. Prediction for October 2020 by Pope Vigano’s Ambassador to the US.
*This is a statement that shows they are not telling their fellows so that the date does not leak out.
In 2021, solar flares to wreak havoc on Earth. :Interpreting Nostradamus at Dec.2020. (Daily Express)
May 6, Asteroid (2009 KF1) hits the earth. 15 times larger than Hiroshima bomb. :Interpreting Nostradamus at Dec.2020.
May 25 – May 28, World Economic Forum, “The Great Reset“.
This is the big period; it’s a given that the government bankruptcy (confiscation of assets) will be over before May 28. The conference is held every year in January, but it was postponed to May. So far, there are three important dates to watch out for.
.
January 15, when Mr.Son’s prediction coincides with the BTC crash, is not so serious.
Next is March, the peak of the panic due to mass deaths.
Next, the end of May when the market resets. These three are important.
You don’t have to worry about missing your savings confiscation date if you monitor it until June. I will continue to update this page as soon as there are any disturbing developments.

~Conclusion of the criminal investigation~
The savings confiscation date is May 6th. If the destructive power of a planetary collision is equivalent to 15 atomic bombs, it is without a doubt an EMP weapon itself. Above all, the order of the dates is reasonable.
If the date is May 6 according to the world standard time, it is convenient to steal the savings because May 5 is a holiday in Asia. Banks are closed in China, Japan and Korea.
If the government steals your savings, the people will resent it. But if it’s a planetary collision disguised as a natural phenomenon, the people won’t resent anyone, they’ll just give up and accept it.
If the prophecies of Nostradamus (the world rulers in disguise) are this detailed, are they asking me to expose them?
In addition to FAKE Nostradamus, FAKE Baba Vanka’s prophecy had the same content. (Daily Mirror)
The Economist magazine’s prophecy from 32 years ago matches this scene perfectly.
There will be a Great Reset Conference “at the end of same month” when the global power outage caused by the planetary collision has reduced the governments’ debts to zero and the world’s bank balances to zero. This is theatrical.
The following month, the Tokyo Olympics will be held in a festive atmosphere as a tool to cover up the despair of the people whose savings balance has dropped to zero. This is also theatrical.

The dates lined up nicely. A criminal investigation connected the dots of the dates with a line. In addition, the Japanese elections also prove that, since they are planning elections in April, (just as the LDP has done in the past) a deliberate defeat in the April elections will hand power to the opposition and give the opposition the planetary collision and the “villain to confiscate the savings”. As I will update on this page, May 6 is even more definite if there is a change of government in Japan in April.
Furthermore, NASA will fall after announcing the planet’s fall to the world from time to time, so you too will be convinced that your savings account balance will be zero on May 6.
~The third prediction of the world’s rulers. 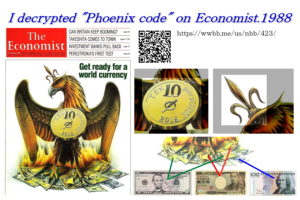 The Economist magazine predicted 32 years ago that the world would be burned to the ground. This coincides perfectly with May 6th. The phoenix coin will play an active role” after the fall of the planet has reduced the world’s bank balance to zero and the securities balance to zero. It’s a perfect match.
.
.
_______Added later, Jan. 22.
The reminder news is out. This is definitive.
The Russian government has brought Russian troops back to their country after sending them to their allies in preparation for the 2021 collision with the planet Nibiru. They all know that “Planet Nibiru is fictitious. It’s a US lie,”  but started preparing for the lie. This is such an action that we can say, “May 6th is confirmed!” Let’s all seriously prepare for May 6th. Your friends and family will also have zero savings, so tell them about this page to prevent damage.
You can copy or reprint my page with this URL displayed.
https://wwbb.me/us/nbb/alert-savings-forfeiture-date-by-emp-is-may-6/

Defense! How to protect your SD card from EMP weapons.
2 ways of saving defense. Physical gold coins or Bitcoin( cold wallet app )
.
The bad politics of any country can be solved with these two.
Punch Voting Election method that made injustice 100% impossible.
Most Ideal Politic System( MIPS)…200 parliamentarians ranked in order of enemies / allies. So even those with inferior people selection skills will not fail to vote.
.
.


The inventor will switch from MACRO analysis to MICRO analysis and tell you the detailed situation on the day of the fall.
Like the corona, the planet fall is a fake play. It is just an excuse to steal the world’s savings. The EMP was not a real one, but a self-made blackout to reduce the debt of governments to zero.
Even though the whole world is blacked out (because it is a lie), the nuclear power plants continue to run safely. This is a mysterious blackout.
My prediction is that the blackout will last from May 6th to May 28th. Let’s stockpile a month’s worth of food.
The government will destroy home appliances without blackout, such as PC and web, but TV, a tool to cheat the people, will be unharmed. It’s a comedy. There is no real one, so I think the place to fall is the ocean or a mole hole. I think it would leave a crater, about the size of an ant hell.  They plan to pay for smartphone apps as a temporary measure for bank blackouts, so they won’t cut mobile lines.
After acting out self-made, the government also begins to act crying, “We government also have zero bonds, zero stocks, and zero cash on hand. Do you want to continue this blackout? Do you agree to zero our debt? If the people agree, we’ll print new currency and restore the blackout.” The plan will be to keep threatening, but I’m not afraid because I can read the last day. The threats will last until May 28.
The WEF “Great Reset” conference will conclude by declaring, “Let’s reduce the world’s debt to zero,” and this blackout play will be over.
They are planning to do a play like this. If I were to deduce from their “wanted objectives”, this is how it will play out.
One more thing to note.
I think they plan to delete all social networking sites in the world on May 6, and reset history as well. You, while you’re at it, should copy and save your social networking sites. It is safer to keep a copy on your computer HDD and SD card.
This is where the Economist magazine’s 32-year old prediction of a “phoenix coin in a burning field” takes place. Tesla CEO has bought BTC, so the three forks (BTC, BCH, and BSV) will probably end up merging. What? “The stocks of global corporations are owned by world rulers, so they can’t possibly be manipulating the crash, can they?” I predict that global companies will escape the planetary fallout by swapping their Bitcoin-denominated stocks, as they would crash if their stocks were still denominated in dollars. Since the world’s rulers want to change to a digital currency, I think they plan to boost Bitcoin’s reputation in the planetary play. Even if the whole world loses power, the world will be talking about how “Bitcoin (with its decentralized power supply) was the only one that didn’t lose power. No matter if bank balances go to zero and securities balances (legal tender, stocks, government bonds, commodities, etc.) also go to zero, Bitcoin (which is distributed data around the world） will not lose its balance. It will continue to stand side by side with paper money, but from May 6 of this year, Bitcoin will take the lead. Have your doubts been allayed?
Their goal is cryptocurrency, but the year is until 2030. Bitcoin is safe as long as it is “PoW” and “open source”. It turns dangerous the day 2030 approaches and it connect Bitcoin to AI. So to avoid planetary theatrics, Physical gold coins and Bitcoin (cold wallet app) are the two safest. If you see Bitcoin connected to AI near the year 2030, it is safer to exchange for physical gold coins.
I was not an instant, but a government bankruptcy watcher for many years before the coronavirus. My criminal investigation was written out of concern for all friends around the world. Protect your precious family and friends. Pay close attention. 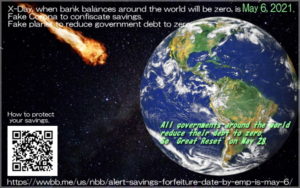