While editing. Translation is in progress.Sorry. English,Spanish, Chinese, Arabic, French,German,Russian,Japanese.

It is common sense that parents at home tell their children over and over again.
“Unless you’re an amateur who can beat the pros, you lose 99% by investing. Never invest.”
Certainly, gambling that competes for money “professionally vs. amateur” is an investment. It’s impossible to win against a professional, and nonsense that there is an investment decided to lose.
The reason that there is a financial market that everyone can lose
is because its managers make money.

= Complete statistical data =The French government’s financial agency investigated the account and said “ Loser was 89%.”(( The most accurate because it is an account. ))* All customers of  Social investment have increased Only 6%. 94% of people lost.Since 600 million dollars flow out to other countries every year, the Britush goverment is serious enough to consider banning personal investment (derived products). 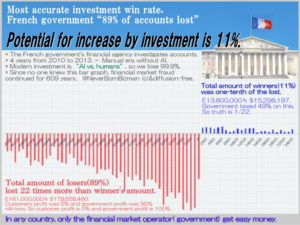 Because now is AI-managed, “Customer’s profit is almost zero and the government’s profit is 100%.”From the government standpoint, there is no business as easy as finance. This bar graph is a financial symbol.Financial scams that have been in effect for 609 years ended with the inventor’s analysis. The curtain dates back to 609 years.

= Conclusion =
Profits from investment are acrobatics that neither the government nor the central bank can do.


= Financial market is outlaw =
Stocks, Forex, Bonds, Oil, Gold, BTC, FX, Futures … Everything is squid, no different from gambling and casinos. Every market are illegal.
Gold: Financial institutions around the world manipulated GOLD prices through rigging and fraudulent operations.
Gold: Merrill Lynch has also been doing illegal GOLD price maneuvers “thousand times” at COMEX for many years. *Gold.
Gold: FakeGold discovered about $50,042,335 in 3 years at JP Morgan’s safe.
Bonds: Mitsubishi UFJ Morgan recommends illegal operations and monitoring commissions for bonds prices.
Bonds:Improper bond prices and levies on Citi companies.
Oil: Mr.George Soros “The rise in oil prices…, price manipulation by speculators.”
Oil: Congressman Hamada “The price of crude oil is controlled by the Bush family.”
BTC: Mr. Warren Buffett “Convenient tool for scam” “scam like casino”
BTC: JP Morgan CEO “Bitcoin is just a scam.”
Metal：ex-JP Morgan metals trader pleads guilty to ‘spoofing’.
Forex: Fines $ 4.3 billion for six major banks due to unauthorized manipulation (HSBC, JP Morgan, Bangkame, etc.).
Forex: Unauthorized operations are also in EU. Even in United States. Even in Switzerland. Even in Hong Kong. Even in Germany.
FX: Incorrect manipulation of spreads by exchanges.
FX: Prof. Rubini “Bitmex as the biggest FX company in the world, fraud in the company is half of sales. ” “The president confessed to me about large-scale money laundering.”

= Even the indicators are forged =
Even the index data that is the market standard is forged.
A whistleblowing to the US federal authorities “The fear index VIX was forged. It was artificially manipulated.“
Bitwise “Statistical site is also a lie. CMC is 6 billion dollars, but actually 4% of display.“
As many as 16 financial institutions  in 15 countries have been sued for illegal manipulation of foreign exchange indicators.
CoinGecko “Customers have chosen exchanges and brands based on impersonation data.”   = Forging for each brand =
Bitwise survey: “Not only for exchanges but also for brands.”
In order to make the brand famous, the company that undertakes transaction fraud for $15,000 = Gotbit.
GotBit confession
“With fraudulent trading, you can fully manipulate the market up to the volume, price, and profit. There are at least 100 companies that offer impersonation systems. The ones that are losing are those who believe in investors and brands.”   In the first place, a worker working in finance market is just one step ahead of heron. It is different from us.
Bitmex President “The financial world is only a fraudster in a suit.”
Prof. Nouriel Roubini “The industry is only fraudsters working with pseudonyms.” = Scam machines vs. humans =
Stock trading is now 80% bot trading. Especially 100% by supplier. Even the machine is a scam, so it’s completely defeated. There is no room to win.
(×) With ultra-high-speed bot buying and selling, 12 millionth of a minute just before an individual order is finalized, instantly counters payment and damages customers.
(×) A device that the exchange will soar in camouflage but not sell. *, *, *, *.
(×) The exchange is soared by impersonation, but does not withdraw money. Close to embezzlement. *,  *, *. 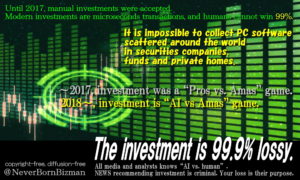 = Customers are also devil =
This is a place where the words “vulture” and “ Hyenas ”, which are known to ordinary people who do not invest, gather.
Investors are also devils aiming for the elderly who participated. It ’s okay to wear clothes from the elderly.
“Investment is a game that takes property away from others.”
“Those who succeed in investing have a high degree of psychopaths. Only unusual people. ”

= Chart is fake =
Since 2018, the world’s market advanced AI has moved the chart.
Stocks, Exchange, Bonds, Oil, GOLD, FX, Futures … AI cannot move because the chart moves in the opposite direction of the customer’s order. The only people left in the market right now are those who don’t know that they are AI partners.
Since SNS has begun to show that it will lose 99% against AI, customers are zero. The disappearance of the financial market is a matter of time. 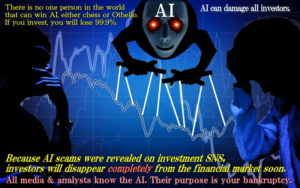 = Shocking facts that even pros don’t know =
The brand is also a lie. The truth is that it is a political party. Are you going to invest in the company? The identity of the brand is actually a political party in each country.
* BTC = Operated by USA Republican Party. Republican funding source.
* XRP = Operated by USA Democratic Party (Clinton Foundation and former Prime Minister Koizumi in Japan)
* ETH = Funding source for Unified Russian Party (Putin).
* BCH = Funding source for Chinese Communist Party. All brands are “political parties that fake the company”. The lies were revealed and they lost the will to hide.
* “PolitiCoin (for donating to politicians)” has emerged.
You were paying to a party rather than investing in a company. So all finance is allowed even for fraud. 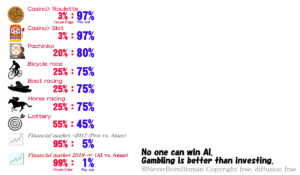 = Only ignorance invests =
The investment was a boring one of the government. If everyone is reading this page, you can reduce the investment damage. Show this page to your children rather than spending hours at school.

= If you invest, hell =
Once you start investing even once. Daily life is paralyzed with the chart going up and down.
Noon = you can’t get your job done.
At night = you will not be able to sleep. Wake up and wake up early in the morning with worry.
So if you do part-time work, you lose your job. Since this hell lasts for 365 days every day (as long as it is owned), it is common sense of investment that psychiatrists frequently occur. I’m worried about the charts and stuck to my computer 24 hours a day, losing my life.

= Investment conclusion =
You can’t get work in the daytime, you can’t sleep at night, and even if you wear your mind, you lose 99% of the time.
Is this a Conte or a penalty game?
Even if you win with a probability of 1%, the profit is only a few percent depending on the tax rate. This is the truth of investment.
A system where the “manager’s government” makes 99% of the money and a genius who wins with a probability of 1%, the “manager’s government” taxes and collects the entire amount. It ’s very easy.

If you invest in Japan, the world’s second worst tax country,
Income tax = 45%
Special reconstruction tax = 0.945%
Resident tax = 10%
Consumption tax = 10%
Scheduled tax payment = 33%.
There are no investors in Japan because 99% of the profits disappear at the tax rate. Only Japanese Investor or part-time workers hired by the government are Japanese investors.
Australian report “There is no news from investment in Japan where the tax rate is extremely high.”

These are the truths of the financial market that no one has ever written.
Individuals lose 95% against professionals and the current investment fights “Unbeatable AI”, so the investment loses 99.9%. The fact that finance and investment exist is wrong. A villainous state-run casino that should disappear from society.
On the other hand, from the government’s standpoint, it will be a problem if the number of “amateurs who do not know anything” does not increase. Such a scam is a story to stop (100% surely) if you are a sibling. If you really want to invest, that person will be a “fraud companion”. I would never recommend it.

There is nothing else (in the world) beyond this page to stop investors.
Share this page with 7 billion people around the world.


The inventor is aware of a blind spot that no one notices.。。
Inventor:NBB’s blog is a continuous discovery every time it is viewed. GREAT AWAKING!

I’m strange that the financial market lasted 609 years. It ended with the analysis of just one inventor.
The fraudulent business is so weak that it ends with a personal one page.
Even after seeing this page, no one invests. With just this one page, the financial market history was ended. English,Spanish, Chinese, Arabic, French,German,Russian,Japanese.

「Everyone loses 99.9% on investment. Because “AI vs humans” in financial market.」への1件のフィードバック