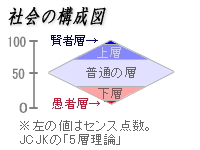 I invented “Business Skill Ranking” and submitted it to the Patent Ministry in 2006. I mixed secretly the function of politics in this application.
Anyway, because it is the same “ability ranking”, I increased the categories and wrote “politicians”.
If politicians (candidates for elections) are ranked in the order of superiority / incompetence, the people will be easier to choose.
In addition, the MIPS system also “reversely assesses” the selected people’s ability to select person, so it is possible to conduct advanced elections in which only those who have a sharp selection of “+5 points” or “+4 points” are voters. From now on,the MIPS system can remove the ignorant class tricked by celebrity candidates.
“Okay! The election is perfect!”
When I didn’t know politics, I thought this was perfect.
Last year I experienced political blog and realized that “something is more important than excellence”, so I added three new functions to this old 2006 edition.

(Additional function: 1)
A function that ranks evil politicians by scoring for and against bills.
As a result, 300 members of parliament
Sort 1… excellent order / incompetent order (ranking).
Sort 2…Lined up in 99% ally order / Lined up in 99% enemy order (ranking).
It is such a web page. Even elementary school students can vote correctly if they see MIPS. No one fails to vote.

(Additional function: 2)
In addition to the main function of ranking politicians, New function newly added. “Perpetual repayment of evil politicians”.
This is a public submission form. No matter where they are in the country, the family and relatives of evil politician can be traced to their offspring.
* Whether to repay depends on the revision of the law.

(Additional function: 3)
This is the ultimate. This is the most necessary function.
Brainwashing judgment. A function that separates  from “a sanity politician” or “a politician brainwashed by spy”.
This is essential. Top priority in politics.
The system is simple and only sent by the people when they make crazy remarks such as “TPP is good” or “Let’s become American slaves”.
Will he be admitted to psychiatry because of this high number of reports?
Finding a brainwashed politician is possible on your smartphone, and will surely be dropped in the next election. If we resign immediately, we need to change the law.

There are three political functions added to the business version of WWBB.
When I invented it in 2006, people were indifferent to politics I thought, “It’s useless to make a political version.” Last year’s diplomatic relations with China and South Korea were “transient.”
However, as the people awakened to politics in this year’s war law, there may be surprising calls for this.
An invention that undermines parliamentary democracy.
It is a future invention that can laugh at modern politics from the sky.

= Summary =
By assessing everyone from a smartphone,,,
(1)  300 members of parliament are in excellent order / stumble order.
(2) Rank 1st to 300th in order of good / bad. (Even children can choose correctly.)
(3) Abolish political parties = Depends on individual abilities. Real intention without being restrained by the party.
(4) Politicians brainwashed by spies can be excluded from parliament.
(5) Advanced elections are possible, in which the ignorant class are removed, and only the experts in the human resource selection are elected.

As explained in the WWBB page, not only me but any ordinary system engineer can make it. Only the difference in algorithm quality that scores human ability. If I make quality 100, other people and beginners of SE should be able to make quality 70 or quality 80 in my own way.
The easiest way is to simply remove the ability now and just be “good order / bad order”.
The ranking is based on the number of times in favor of or against the law revision.
Example: For the “Funding Law“, -1 for yes / +1 for the opposite.
Example: For the “Eavesdropping Law“, -1 for yes / +1 for disagreement.
In this case, without a SE, one programmer should be able to make it in a week. I’ll give someone “to civilians” for political use only in Japan.
My another invention “Punch Voting Election” is also a stationery that anyone can make.

(1) 300 members of parliament (Enemy order / ally order)  lined up in this page.
Even children can vote correctly.
(2)  An invention that made election fraud 100% impossible.
What else do you need besides these two?
Politics will be settled in any country with just these two.

The official name of the “business version” used from 2006 to 2016 is
World Wide Business Bible =WWBB.
This is the “political version” that adds 3 functions to the same system. The official name of the political version of the invention is
“Most Ideal Politic System”=MIPS.
Because it has been registered with the Patent Ministry, both the Japanese government and the LDP  knows who I am.