Election fraud is a big problem common to 200 countries around the world. There has never been a fair election in human history. Never in the world for the last 223 years.
This is a historic invention by DaVinci 566 years later.
This is not ordinary page. ~~Please stare seriously.~~

The cause of injustice is that with digital data, software and computers, nobody notices the backdoor. If digital, elections are dangerous forever.
It should be an analog throughout.
My invention is,
150 times more efficient than current digital,even though it is analog.
It also made election fraud 100% impossible.
~~Please stare seriously.~~

= Election procedure =
We are notified and go to the polling place. This is the same as the current situation. This is a ballot paper that is given in polling place. 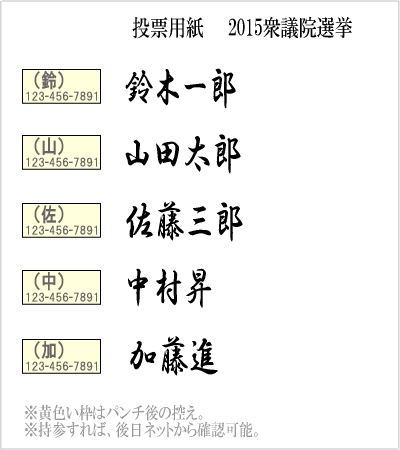 * The candidate’s name is already printed, so we don’t need to write.
* The yellow frame is a square punch hole.(Not circular.)
* The inside of the punched hole is the ID of this paper.

=There is no ballot box=
This explains the case where there are five candidates. There are five punches with different hole positions, each on five desks.
Go to the desk for the name of the candidate you want to vote for and punch a hole.
The voting is now complete. (Please go home. Very easy.) 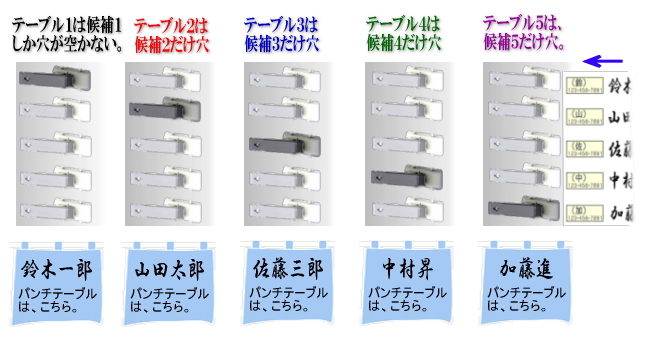 
Voting papers are accumulated.
The ballot paper falls along the punch stick to your feet.
See through.Acrylic box. 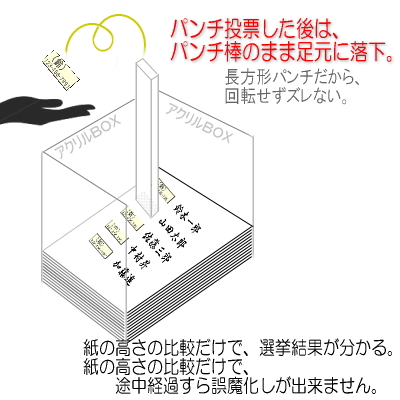 Your spare piece. We can take the punched piece of paper home. It can be confirmed by a smartphone at a later date using the ID of the paper.

=The result turns out.=
We didn’t even need to count. This is obvious.

With this method, even zero civil servants can see the result.
This is the end of the election.
Really, the election is over. Not a dream. The inventor is a magician.

Change point.
1. Abolished handwriting.
2. Abolished the ballot box.
It’s just that easy! More speedy! It was a hotbed of injustice (Handwritten, white votes, written on white votes), there is no need to mix it in or out of the ballot box.
If it is my invention, it is one second! Count at a glance.
There is a scale on the bar, so everyone can see it in one second.

Unrecoverable punch holes!
After a hole in the paper, it cannot be restored.
No corrections or corrections are possible and there are no white votes.
Injustice is no longer possible. No one can recover. More strict !

= Seal at exit =
After voting, double check is also possible at the exit.
Attach the punched piece of paper to the board of the exit investigator. This is valid as a double check. * Adhesive is on the board side (not paper).
Winning defeat can be foreseen outdoors by accumulation of exit boards.
* Even during the process of the race, they can’t deceive.
* The inside and outside of the polling place are perfect matches without error.
* We can see inside data from outside.

= 100% monitoring =
Two cameras that will be broadcast live on the Internet.
(1) Live broadcast only at the foot of the polling desk.
Because the height of the skewered votes is live, the difference between each candidate is clear.
(2) The second camera broadcasts the board of the exit seal live.
The consistency between the polling place and the exit survey is completely consistent. Since the process of accumulation is a live broadcast, even the process will not be deceived.

=Open to the Internet.=
Display the foot camera and the exit seal camera on the same browser,
And live broadcast on the Internet. Fraud is 100% impossible. 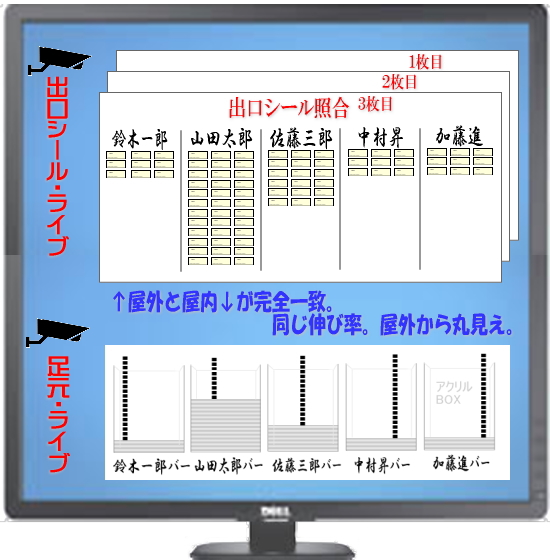 = Confirmation at a later date =
If you watch this recorded video at the time you voted, your feet are on video. You will laugh and convince.

It can never be increased.
One vote per person on two legs, so even inflated fraud is impossible.
Checking on recorded video (not just ballot papaer), the number of votes and the number of feet are exactly the same.
It is impossible. I’m off.
I can’t help. I Can’t move, Nogueira’s joint technique!

Effect of my invention.
* I have completely eradicated injustice. There is no gaps.
* No counting required,
* No sorting work required. Originally sorted.
* No need for a large part-time job = 0 people.
* Election Commissioner?  They can go out of business.
* It is enough when one professional wrestler stands alone to prevent theft of votes.
* One punch = time is also reduced.
* No queue. No waiting time. 100 million voters can return immediately.
* You can get the winning confirmation mark in a glance = 1 second,
but “Is there any problem with me? ” “Do you want more troublesome?”
What have humans been doing so far for 223 years?

Significant cost reduction.
Because it is a punched hole, it can be realized with stationery cost.
The current election fee of $ 450,000,000 → Buy stationery once and get free. National elections are cheap enough for individuals to do.
There is no way not to do this. surprise!
Conversely, the analog vote was much faster than the current digital vote! And it was definitely cheaper. National elections at stationery costs.
What have humans been doing so far for 223 years?

In the first place, at 200 countries of the world, writing by hand / mixing in the ballot box / putting it out / collecting / bundling /recounting …
From an inventor’s point of view, everything humans do is comedy.
It seems stupid to have handwritten voting around the world.

“Work is efficient!”
This is common sense for a company employee who has done production work. My company also had one-fifth the number of employees when we sold three times that of the second-ranked company in same industry.
Even though it was exactly the same job, we came up with various ideas and “15 times more efficient.”
This punch voting election is =”150 times more efficient.”
The cost comparison is =”$ 450,000,000 : $ 0″.
The work of civil servants is =”4 hours 41 minutes : finished in 8 minutes”.
The voting time is =”30 seconds for handwritten voting : 1 second for punching”.

Anonymity? Every public hall has a partition. It is not known who voted for whom. Walking route↓ 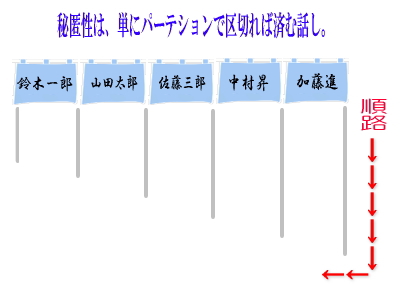 “This is clearly a warehouse logistics operation!”
Exactly. When I was 22 or 23 years old, experience working in the warehouse, it led to the   invention of this punching work.  My company has no manufacturing ever since independence, so it was invented by “23-year-old JCJK.”
The inspiration for this idea was stationery”paper stabs”. Yeah, convinced!

566 years later, Da Vinci described the historic invention of changing the politics of 200 countries, the “punch voting election.”
* Made election fraud 100% impossible. Not only that but also efficiency.
* Reduce labor costs (1/150).
* Reduced time (1/150).
* Cost reduction (1/150).
In all aspects, the punch voting method is better.
From today,
Let’s spread this punch voting on Blog, Facebook and Twitter.
https://wwbb.me/us/nbb/punch-voting-election/

= Strategy to be realized (1) =
Sneaky governments hate fair elections, even if they simply recommend them, so don’t appeal with fraud. Let’s appeal with efficiency.
* Dramatically reduced work efficiency to 1/150.
* Can be done by 1/150 people.
* The current election cost of $ 450,000,000 can be reduced to $ 3,000,000.
* Running costs are $ 0.
“Reduction of election costs. Achieved with stationery costs.”
“From the second time on, running is $ 0. Elections cost $ 0.”
Busy!
“I don’t want to line up and return in one second.”
“Everybody is busy. We return in a second.”
“It’s 100 million times faster.”
If it spreads, public opinion will erupt and the government will lose reason to refuse.

= Strategy to be realized (2) =
Send this page to opposition lawmakers who are working hard to defeat the Cabinet.
https://wwbb.me/us/nbb/punch-voting-election/
They will have a promise to win in the next election. Certainly, opposition members want it!
“If the ***Party wins, there will be no fraudulent elections in the future.”
“If the ***Party wins, future elections will be forever clean.”


= Strategy to be realized (3) =
Above all, it is meaningless if it is not widely reported in the media. If someone lets a friend of a stationery maker make a prototype, newspapers and TV will feature in the news.

= Strategy to be realized (4) =
Anti-government prefectures or states can also try this. It is an invention that all the people will make big noise if it is reported on TV even once.
Instead of the finished product as described here, just stab a ballot paper into a bar similar to stationery “paper stabs” and stack it. This is easy to imitate.

= Strategy to be realized (5)=
Easier is not limited to politics.
* Class chairperson election at school.
* Neighborhood Association president election.
* In a shareholder vote at a general meeting of shareholders, mimicking this vote can also lead to news.
At least once, everyone is in a fuss, so public opinion will be excited that “do this in national politics.”

I made eight language versions. Translate into multiple languages and spread to 200 countries around the world! (I waive copyright.)
Recently suffered Hong Kong and France will catch this first. Middle Eastern and South American countries struggling in the elections will catch this.

= Strategy to be realized (7)=
The easiest way is to tell this page to “foreign newspapers and TV stations” such as the BBC and the Guardian. The world will be amazed, and the next day after being broadcast on TV, all developed nations will begin to make noise. If everybody look at this page, there is no country that continues the current election. You can attack your government from the outside.

Election improvement is more effective than anyone writing any topic on SNS. It is better not to write any political topics on SNS in the future.
Concentration on this alone will resolve politics.
Do you understand?
Will you forget tomorrow?
It’s the resolution of wrongdoing elections more than who writes what.